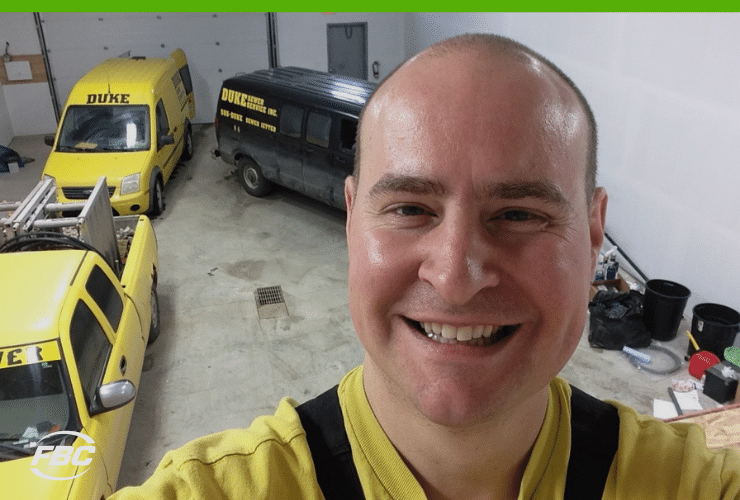 By the time Matthew Clayton was 25 years old, he was self-employed as a rental property owner and owned up to 20 houses in Regina, Sask.

By the time Matthew Clayton was 25 years old, he was self-employed as a rental property owner and owned up to 20 houses in Regina, Sask.

He already possessed the entrepreneurial spirit and work ethic that would help him start and run the successful company he still owns today – Duke Sewer Service Inc.

While managing his properties, he discovered the need to clean sewer lines on an annual basis to prevent clogs.

He knew it was an untapped market in Regina and took the idea to a friend who used to work for a sewer cleaning company.

Together they hashed out a plan to start their own sewer service and repair company.

In January 2006, they incorporated Duke Sewer Service. Like many small business owners who launch a new venture, they faced challenges in growing their business.

“Our big plans were soon dashed as we naively thought our promotions and advertising would work well,” Clayton says. “It didn’t, and we didn’t even make enough to pay ourselves, or to pay the company bills.”

Finding it stressful to keep up with his rental properties on top of running Duke Sewer Service, he left the rental home business in 2007.

The experience left him with a lot of hard-earned lessons.

“I don’t regret that part of my life because the reason Duke Sewer is successful today is because I failed and made a plethora of mistakes that I learned valuable lessons from,” Clayton says.

And the exit from the rental industry gave him more time to focus on the new company.

“I bought out my partner in the summer of 2007 after Duke Sewer nearly went bankrupt,” Clayton says. “I used the money from the sale of a few of my houses to pay off the company debt and keep my family afloat while I worked at growing the business. Duke Sewer was now all I had.”

With only one van and one man (himself), Clayton hit the road and worked more than 1000 days straight without any time off.

He was on call 24 hours a day and he took any call to grow his business.

His family survived on about $800 a month, which was all he could afford to take home from his earnings.

“It was an extremely hard time on my family, but my wife Ailyn stuck by me all the way. She deserves a huge amount of credit for the success of the company just through her support and encouragement.”

The hard work paid off.

In 2010, Clayton took a terrifying but calculated risk – he hired his 1st employee.

“After 3 years of taking every single call that came in, I had grown the business to the point where I was turning away customers every day. Duke Sewer now had two vans, and for the first time in 3+ years, I had a day off! Sundays were mine!”

He took the opportunity to travel to Edmonton to watch the Roughriders fight for the 98th Grey Cup.

Two years later, he hired his 2nd employee and Duke Sewer Service had 3 vans running. Clayton could now take both Saturday and Sunday off and go on vacation with his growing family!

Not too long after that, Duke Sewer was becoming too big to run out of Clayton’s home office.

“My old line of work taught me that it’s better to own than to rent, so I went to the bank to see about buying a commercial property. When I was told that I needed a 30% down payment, I became extremely discouraged. With the properties that I was interested in buying, I would need over $100,000 in cash, and I was nowhere near having that kind of money. So I started saving.”

In 2013, Regina suffered terrible rain storms and many homes flooded. The phone calls kept coming in.

“I spent about 3 months straight putting in sump and backwater systems in houses all over the city. Those systems were profitable, and in that 3 months, I was able to earn enough money to put a down payment on a commercial property and my bank financed the purchase of my shop.”

Clayton took possession of his shop in February 2015.

He reflects on how this was a significant “small business win” for him and his company: “There was an evening that summer where the guys had gone home for the day, and I was cleaning the shop with the big door open all the way, and it started raining. There was a rainbow in the distance and the shop was filled with that beautiful smell of rain and freshness. I stood there looking at the rain coming down and thought about how far I’d come. I had awesome employees, the company was growing and doing well, and I felt for the first time like I had ‘made it.’”

In 2016, Duke Sewer expanded again to add another van – business was booming.

The only problem was Clayton was still working two jobs – he was in the field and dealing with all the phone calls and paperwork at the office too.

Spending 12-15 hours in the office on weekdays caused his blood pressure to skyrocket.

He knew it was time to let someone else handle the administrative part of the business.

In 2018 Clayton hired an office manager so he could work a more reasonable schedule.

With his blood pressure and stress levels finally dropping down, he added another van in September 2019.

Duke Sewer now employs 5 techs (Clayton is still one of them) along with the office manager and they keep growing.

The goal is to become the #1 sewer company in Regina.

And with employees both in the office and on the field, Clayton can keep taking vacations with Ailyn and their 5 children.

Clayton found FBC to be a big help with keeping his tax burden low. FBC helped him set up a new corporate structure so he could maximize his tax savings: “FBC was huge for me. They recommended changes right away that saved me thousands of dollars per month.”